The Incoterms ® are a set of trade/trade rules used by the International Chamber of Commerce (ICC) in international sales contracts. The Incoterms are not binding rules – to obtain legal effect for them, they must be explicitly included by the parties in their contract. In the following paragraphs, according to the classification of the Incoterms, we will describe the basic functions of Incoterms, which are used for all modes of transport, as well as those used only for maritime and inland waterway transport.

The Incoterms are divided into four main categories: E., F., C and D.

The four categories mentioned above can also be classified by means of transport:

Each Incoterm contains a set of rules of interpretation for the obligations of both sellers (A1-A10) and the buyer (B1-B10) covering the following topics:

Basic functions of Incoterms for all modes of transport

The EXW Incoterm imposes only minimum obligations on the seller. More precisely, the seller is only obliged to deliver the goods at a designated place of delivery to the buyer, which is normally the seller’s place of business, but this may be a specific place, e.g. a warehouse, factory, etc., and within the agreed time specified in the contract. It is not necessary for the seller to load the goods into a particular vehicle or release the goods for export. If the place of delivery is not specified in the contract, or if multiple delivery locations can be provided, “The seller can select the point that best suits its purpose.” Generally speaking, until the goods have been delivered as indicated in the sales contract, the seller bears all risks of loss or damage to the goods. Once delivered, this risk is automatically transferred to the buyer. The same applies to all costs associated with the goods – up to the delivery of the goods, the costs borne by the seller; after their delivery, by the buyer.

Several experts suggest that the EXW Incoterm is better suited for domestic use (and not international) trade and point out that “it is often used in courier shipments when the courier picks up the shipment from the customer and loads the courier’s own truck. The payment terms for EXW transactions are usually prepayment and account opening.”

As mentioned in the ICC Guide for Incoterms 2010, parties sometimes add a term a “loaded”. After referring to EXW Incoterm, i.e., EXW loaded, into their purchase agreement. Such an addition is normally intended to extend responsibility to loading operations. however, without further clarification, it is quite difficult to say whether such a term is “loaded at the risk of the seller” or “loaded at the risk of the buyer” and can be interpreted in the event of a dispute. In this respect, if “loaded” should extend liability to the seller, the parties may consider inserting the FCA Incoterm, and not EXW, into their contract. However, you should take into account that the FCA Incoterm requires that the obligation to release the goods for export is also borne by the seller. 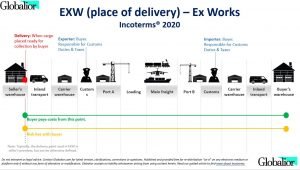 Under the FCA Incoterm, the delivery of the goods is as follows:

With regard to the carrier, this is normal ‘a company that transports goods or passengers for rent, rather than simply arranging such a transport. Examples are a shipping company, airline forwarding company, or railway. In the FCA term of office, however, the carrier may be provided by any person who is contractually obliged to provide or procure such services”.

In 2020, several new commitments have been added to the FCA Incoterm. For example, the parties may agree that the buyer instructs the carrier to issue the transport document (invoice of the landing) with the on-board notation to the seller. In return, the seller undertakes to send this document to the buyer, “Who needs the landing certificate to obtain the unloading of the goods from the carrier.” 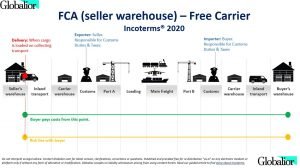 Under the CPT Incoterm, the delivery of the goods takes place when it is delivered by the seller to the agreed place to the forwarding agent or procured by the thus delivered seller. In this respect, the Seller is contractually obligated, at his own expense, for the transport of the goods from the place of delivery to the destination of the goods. The existence of the contract of carriage has no influence on the transfer of risk from the seller to the buyer, i.e. by handing over the goods to the freight forwarder, which occurs at the time of delivery. However, if the seller incurs costs for unloading goods at the place of destination under the contract of carriage, it must bear them, unless otherwise agreed.

The CPT Incoterm also requires the seller to release the goods for export where applicable and assume all associated risks. However, the seller has no such obligation to import. Neither the seller nor the buyer is required to enter into an insurance contract. 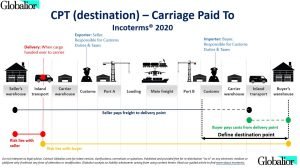 Under the CIP Incoterm, the Seller has the same obligations as under the CPT Incoterm, i.e. to hand over the goods to the carrier commissioned by the Seller and to release the goods for export, with the addition of an insurance obligation to cover the risk/damage of the buyer to the goods from the place of delivery, at least, the destination.

With regard to insurance, it is to be made in accordance with clauses (ON) of the institution’s freight clauses, or similar clauses, and should cover, at least, the contractual price plus 10%. Before the 2020 revision of the Incoterms, only a minimum insurance cover according to clauses (C.) of the institution’s freight clauses was needed. However, even today, the parties can agree on a smaller coverage. Once contractually agreed, the seller is obliged to provide the buyer with the insurance policy or the certificate. 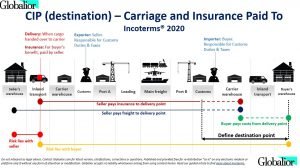 This Incoterm is normally used in cases where the parties do not wish the Seller to bear the risk and costs of unloading, as opposed to the DPU Incoterm. Under the DAP Incoterm, the goods are deemed to have been delivered by the seller to the buyer if they are made available to the buyer on the transport vehicle that can be unloaded at the destination or at an agreed location within that place, if at all. In contrast to the CPT / CIP incoterms, the place of delivery and the destination are identical according to the DAP incoterm. Therefore, the seller bears the risk until he has made the goods available to the buyer at the destination as described above. 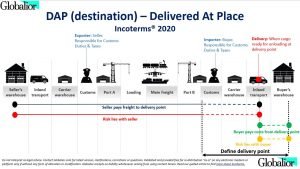 In addition, the Seller undertakes to conclude a contract of carriage or to arrange the carriage at its own expense. It is also obliged to release the goods for export. However, there is no such obligation for imports. The buyer is obliged to assist the seller in obtaining relevant documents for the export clearance formalities, at the expense of the seller.

Unlike the CIP Incoterm, the seller (or buyer) has no obligation to take out insurance under the DPU Incoterm. 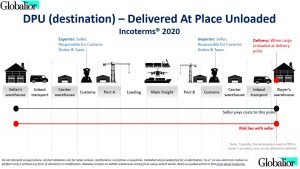 Under the DDP Incoterm, the goods are to be delivered by the seller to the buyer when it is made available to the buyer, released for import, on the arriving transport vehicle, ready for unloading at destination or at an agreed point within that place, if at all. The DDP-Incoterm imposes maximum responsibility on the seller as it is the only Incoterm that requires an import permit from the seller.

As with the other Incoterms, the DDP Incoterm requires the Seller to conclude the contract of carriage or arrange the carriage at his own expense in any other way. There is no insurance contract, however, required by the seller/buyer.

The Seller is not obligated to conclude a contract of carriage. In return, it is the buyer who bears all the costs for the carriage of the goods from the said shipping port. Consequently, the FAS Incoterm is not suitable for cases where the goods are to be handed over only to the carrier, e.B., at a container terminal before they are placed next to the ship. For this scenario, the FAS Incoterm mentioned above is more suitable.

In addition, the seller is obliged to release the goods for export (do not import). There is no need to take out insurance. 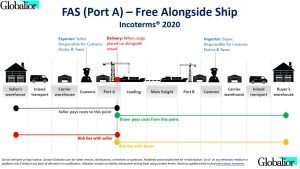 FOB Incoterm (Free On board)

As with the FSA Incoterm, the Seller is not obligated to conclude a contract of carriage. All costs for the transport of the goods from the said port of shipment shall be borne by the buyer.

The FOB Incoterm does not require insurance to be taken out by the seller or buyer. 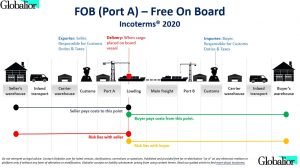 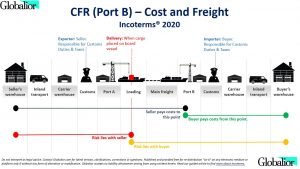 The regime of the CIF Incoterm is very similar to that of the CFR Incoterm:

The main difference between CIF and CFR is the obligation under CIF-Incoterm that the seller concludes insurance cover against the risk of the buyer of loss/damage from the port of dispatch, at least, the port of destination. however, unlike the CIP Incoterm (see above), the Seller is obliged to take out a minimum insurance according to clauses (C.) of the Institution’s freight clauses, or any other clause (not clauses (EIN) of the Institution’s freight clauses as required for the CIP Incoterm). 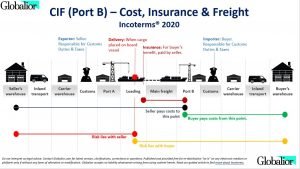 The use of incoterms in international trade is a widespread phenomenon, and disputes often arise due to confusion over them. Before inserting an Incoterm into a contract, it is imperative that the parties ensure that the Incoterm meets all their expectations and needs with respect to the following points:

Join us on LinkedIn:

We use cookies to give you the best user experience.

This website uses cookies so that we can provide you with the best user experience possible. Cookie information is stored in your browser and performs functions such as recognising you when you return to our website and helping our team to understand which sections of the website you find most interesting and useful.

Strictly Necessary Cookie should be enabled at all times so that we can save your preferences for cookie settings.

If you disable this cookie, we will not be able to save your preferences. This means that every time you visit this website you will need to enable or disable cookies again.